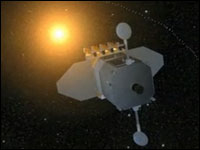 Originally planned for launch on Tuesday, NASA’s Solar Dynamics Observatory was delayed once again on Wednesday due to high winds. 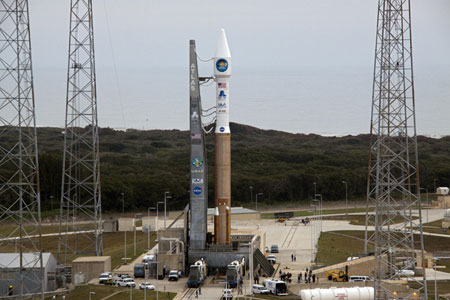 The new planned launch for the device from Cape Canaveral Air Force Station in Florida is Thursday, Feb. 11; the launch window is between 10:23 a.m. and 11:23 a.m. EST.

The SDO will undertake a five-year mission to investigate in unprecedented detail the energy processes driving the sun’s stormy activity. The 6,555-pound spacecraft will return 1.5 terabytes of data every day — equal to half a million downloaded songs — and provide detailed images of near-IMAX-quality high resolution.

It was once thought that the sun was a constant star, unchanging in nature and in the blaze it radiates toward earth.

Turns out, however, that’s not the case.

Rather, modern telescopes and spacecraft have penetrated the sun’s blinding glare and found a maelstrom of unpredictable turmoil. Solar flares explode with the power of a billion atomic bombs; clouds of magnetized gas big enough to swallow planets break away from the stellar surface; holes in the sun’s atmosphere spew million mile-per-hour gusts of solar wind.

And those are the things that can happen in just one day.

Over longer periods, solar activity waxes and wanes with a complex rhythm that researchers are still figuring out. The most famous “beat” is the 11-year sunspot cycle, described in many texts as a regular, clockwork process. In fact, it seems to have a mind of its own.

‘No One Knows Why’

“It’s not even 11 years,” says Lika Guhathakurtha, a lead program scientist with NASA. “The cycle ranges in length from 9 to 12 years. Some cycles are intense, with many sunspots and solar flares; others are mild, with relatively little solar activity.

“In the 17th century, during a period called the ‘Maunder Minimum,’ the cycle appeared to stop altogether for about 70 years, and no one knows why,” Guhathakurtha added.

Currently, the sun is climbing out of a century-class solar minimum that almost no one anticipated.

Indeed, humans have been monitoring the solar cycle since the 1600s, but “the details of the mechanism for that cycle still haven’t been totally worked out,” Scott Austin, associate professor of astronomy and director of the astronomical facilities at the University of Central Arkansas, told TechNewsWorld.

That’s a problem, because human society is increasingly vulnerable to solar flareups. Modern people depend on a network of interconnected high-tech systems for the basics of daily life. Smart power grids, GPS navigation, air travel, financial services and emergency radio communications, for example, can all be knocked out by intense solar activity.

Another issue that’s yet to be understood is why the sun’s corona is so hot, Austin pointed out.

Enter the Solar Dynamics Observatory, which is designed to probe solar variability in a way that’s unlike any other mission in NASA history.

The SDO is designed to observe the sun in greater detail than previous observatories, breaking through barriers of time-scale and clarity that have long blocked progress in solar physics. The SDO is the first mission and crown jewel in a fleet of NASA missions to study the sun.

For example, “the sun actually vibrates in different modes, and those modes can be picked up spectroscopically,” Austin noted. Such vibrations — which are much like those observed on the head of drum — may give clues to its cycles, he added.

When it launches, the SDO will head to an orbit about 22,300 miles above Earth. From that altitude, the spacecraft will point its instruments at the sun and relay the readings instantly to a ground station in New Mexico.

The device will constantly take high-resolution images of the sun, collecting readings from inside the sun and measuring its magnetic field activity.

It will send back almost 50 times more science data than any other mission in NASA history.

‘Hundreds of Thousands of Miles in Size’

Interactions that occur on the sun’s outer surface are where a lot of its radiation and temperature come from, Czysz explained, resulting in “huge loops hundreds of thousands of miles in size.”

Solar output has dropped a bit since humans started measuring it, he pointed out, so the SDO will provide a new way to understand the complexities of what’s going on.

“There are so many things that are going on in the sun,” Czysz noted, “it’s a miracle” it stays more or less the same.