The End of the Printing Press? 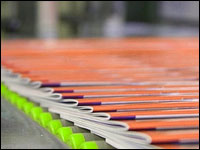 Electronic communications are reshaping personal life, and may right now be causing the rapid demise of print.

Media academics know well the theories of Marshall McLuhan. He came up with the phrase “the medium is the message,” and the term “global village,” among other juicy contributions to our comprehension of media.

Without going into too much depth on a subject that people spend years trying to understand, roughly speaking, “the medium is the message” means that the wrapper containing the content is part of the message, and that there’s a relationship between the two parts.

McLuhan joined with Quentin Fiore, in 1967 to write The Medium is the Massage: An Inventory of Effects. In it, they posited that electronic technology is reshaping social interdependence — about 20 years before Internet service providers began to sprout up allowing mass access to the World Wide Web and email.

More than 40 years after they said it, we now have apps and social networks replacing e-mail in social environments, like Facebook.

Using what we know from these 1960s theories — which seem as if they have been proven correct — is it not possible to argue that the printing press, invented in 1440, has outlived its usefulness, and that there’s no possible way of return?

Readers have increasingly adopted digital formats, said Tina Brown, as The Daily Beast ceased print publication of the iconic Newsweek magazine. A comScore analysis found that two out of every five Americans now look at newspapers and magazines on mobile devices, she noted.

It can be argued that Brown’s announcement was delivered partly because we’ve tasted social interaction within our media — created by electronics — and that alone is enough to suggest that electronic forms of communications are superior to print. Then add the other benefits like speed, and you’ve got a superseded technology — print.

McLuhan accurately predicted electronic communications would reshape personal life. In fact, not only has it done that, but it also has reshaped media and their delivery mechanisms.

Next Issue is an app that offers a digital newsstand. Popular magazines like Sports Illustrated, Time, The New Yorker, Vanity Fair and others are replicated in print format, but are customized for the electronic environment — specifically tablet — with videos and other bonus features like social network Twitter feeds. Pricing is all-you-can-eat, like the music app Spotify.

“Apps like Next Issue combine the same great reading with video, audio and interactive content, real-time social engagement and high resolution imagery not possible in the print format,” he said.

“Electronic is instant. You hear about the story as it breaks. Electronic is unlimited,” he told TechNewsWorld.

Pulse is a news-wall app that parses RSS feeds from multiple publications into one colorful mosaic. The requisite social network functions are included, allowing the sharing of articles via Facebook, Twitter, or email.

“Electronic is always with you. You get the news on your phone or tablet wherever you are,” Kothari added.

“People are more mobile, connected and busier than ever before. The way we consume content must take this into account and the old way of delivering news doesn’t currently fit our fast-paced lives in the 21st Century,” said Nick D’Aloisio, publisher of the news aggregating app Summly. “We must therefore adapt and find a way of bringing news and publishers into sync with the way we consume information, which is increasingly happening on mobile devices.”

Could magazines, as a medium actually grow through electronic delivery?

“When you add instant access to magazine back catalogs, easy search and personalization across titles and the convenience of a single device, it’s easy to see magazines turning into a growth industry again.” Guenther said.

Print technology fostered and encouraged a fragmenting process, and it was a process of detachment, McLuhan and Fiore said. Electronic technology encourages unification and involvement, even if we have to retire a 500-year-old technology to do it.