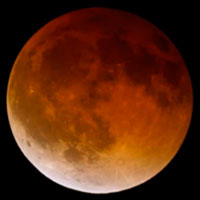 A total lunar eclipse in the early hours of Tuesday gave viewers in parts of the world a rare glimpse of what’s sometimes called a “blood moon,” due to the reddish hue it takes on as a result of dust in the atmosphere.

Beginning at about 1:55 AM EDT on April 15, the eclipse lasted roughly three and a half hours — peaking at 3:45 a.m. EDT — and was visible in North America, South America and Australia, with partial visibility in parts of Asia, Africa and Europe.

Lunar eclipses last much longer than solar eclipses do and are safe to view with the naked eye.

“While such events are relatively rare, albeit much less so than a total solar eclipse, they are very beautiful to behold,” William Newman, a professor in UCLA’s departments of earth, planetary and space sciences, physics & astronomy, and mathematics.

“Eclipses have held the fascination of humans since time immemorial and continue to amaze,” he told TechNewsWorld.

It’s only because of the Earth’s atmosphere that the Moon doesn’t go completely dark during an eclipse. Instead, it reflects light from the Sun passing through Earth’s atmosphere, giving it the reddish “blood” color.

“Interestingly, the principle of the effect that gives the Moon its red coloring during lunar eclipse was first described by Leonardo da Vinci,” said Mario Livio, an astrophysicist with the Space Telescope Science Institute and author of Brilliant Blunders.

Why the Sky Is Blue

“Basically, shorter blue wavelengths are more likely to be scattered by particles in the Earth’s atmosphere,” Livio told TechNewsWorld. “Leonardo understood that this is what makes the sky blue.”

However, at sunrise and sunset — and during lunar eclipses — the sunlight passes through a thicker layer of the Earth’s atmosphere, scattering all the shorter wavelengths and allowing only the longer, redder wavelengths to pass through.

“In that sense, in a lunar eclipse — in which the Sun is behind the Earth as seen from the Moon — the Moon is observing sunrises and sunsets all around the Earth,” Livio said. “This is what gives the Moon that eerie blood moon appearance.”

On average, lunar eclipses occur about twice a year, though only some of them are total eclipses.

“During the 21st century, there are eight sets of tetrads, so I would describe tetrads as a frequent occurrence in the current pattern of lunar eclipses,” noted NASA eclipse expert Fred Espenak. “But this has not always been the case. During the three hundred year interval from 1600 to 1900, for instance, there were no tetrads at all.”

The current tetrad has even sparked at least one religious interpretation.

“First, only the Earth among our terrestrial planetary neighbors — Mercury, Venus and Mars — has a large natural satellite,” Newman explained.

In contrast, the Jovian planets — Jupiter, Saturn, Uranus and Neptune — have many satellites, he pointed out.

“We have come to appreciate that our moon is the result of the collision between a Mars-sized asteroid and Earth nearly 4.5 billion years ago,” he added. “All of this is telling us something remarkable about the formation of our solar system and, quite possibly, the formation of the hundreds of new solar systems that we have just discovered.”

The Influence of Pollution

Then, too, there’s the dust in the atmosphere causing the Moon’s reddish hue during an eclipse.

That dust “is the product of many natural processes as well as man-made ones, a reminder of the pollution present here due to the burning of coal and other materials,” Newman said.

“Overall, last night’s celestial event serves as a reminder of the special circumstances associated with the formation of our planet,” he concluded, “as well as the nature of our present-day environment.”