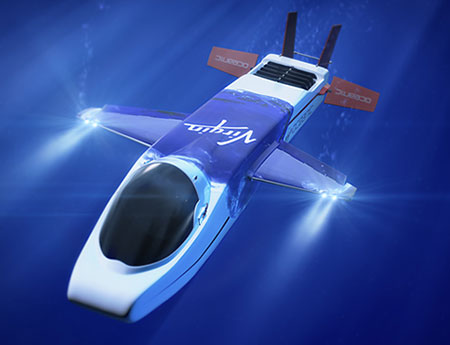 Space may be the final frontier in many senses of the word, but it’s by no means the only one facing mankind. Targeting one of the great mysteries that still exist here on Earth, entrepreneur Sir Richard Branson on Tuesday announced his plans to begin a series of deep-sea explorations through Virgin Oceanic, a brand-new initiative.

In fact, Virgin Oceanic plans to take a solo piloted submarine to the deepest points in each of the world’s five oceans in what the company says will be the first time such a feat has ever been attempted.

“Virgin Oceanic will expand the reach of human exploration on our planet,” Branson said. “By promoting and utilizing new technology, Virgin Oceanic will aid humankind’s ability to explore our Oceans, assist science in understanding our ecosystem, and raise awareness of the challenges facing our Oceans.”

Working with leading scientific institutions and mapping technology from Google, Virgin Oceanic aims to make five dives in five oceans over the course of 2011 and 2012, using the world’s only submarine capable of taking a human being to such extreme depths.

As many as 30 Guinness World Records could be set along the way.

In the Pacific Ocean, for example, sub owner and operator Chris Welsh will dive to the Mariana Trench — the world’s deepest, at 36,201 feet below the surface — with Branson as backup pilot. Because the sub “flies like an airplane,” Welsh will not only be able to reach the deepest point on Earth, but he will be able to “fly” along the bottom of the trench an additional 10 kilometers.

In the Atlantic, Branson himself will pilot to the Puerto Rico Trench, which lies 28,232 feet below the surface and has never been explored before; Welsh will act as backup on that trip.

Additional dives will take place in the Diamantina Trench in the Indian Ocean, South Sandwich Trench in the Southern Ocean and Molloy Deep in the Arctic Ocean.

‘The Most Poorly Accessible Habitat on Earth’

“From the scientific perspective, my view is that this endeavor offers the opportunity to observe and make measurements in an environment that is otherwise not accessible to human exploration,” said Katrina Edwards, director of the Center for Dark Energy Biosphere Investigations at the University of Southern California, who will be focusing on the study of the life that survives and thrives in sediments and rocks at the bottom of the ocean.

“This expedition offers a lens into microbial and other species’ diversity at depth in our oceans, the most poorly accessible habitat on earth,” Edwards added.

Indeed, “it sounds like a really cool project,” Steven D’Hondt, professor of oceanography at the University of Rhode Island, told TechNewsWorld. “There’s a potential to learn a lot.”

In addition to providing a better sense of the diversity of life, the effort could be particularly useful in shedding new light on how “the highest pressure ecosystems differ from lower pressure ones,” D’Hondt explained.

A study of microbes adapted to life in the deep ocean’s high-pressure conditions, in fact, could potentially even have commercial applications in the long run, he added.

Virgin Oceanic’s submarine was originally commissioned by record-setting adventurer Steve Fossett, the close friend of Branson’s who had intended to complete the first solo dive but then went missing in 2007.

Constructed from 8,000 pounds of carbon fiber and titanium, it is the only piloted craft in existence that has “full ocean depth” capability, Virgin says. It offers an operating depth of 37,000 feet, or seven miles, and is capable of operating for 24 hours unaided.

Once fully descended, the submarine’s wing-like hydroplanes and thrusters will allow it to “fly” over the ocean floor while collecting video and data. It will cruise at a maximum of three knots and can dive 350 feet per minute, meaning that the dive to the bottom of the Mariana trench and back is estimated to take about five hours.

Rather than replacing Virgin’s space-focused quest, then, the new ocean focus is a parallel attempt to unravel some of the many competing mysteries that exist here on our own planet. Less than 3 percent of the sea floor has been explored, according to Virgin Oceanic.

“With space long ago reached by man, and commercial spaceflight tantalizingly close,” Branson wrote in a blog post, “the last great challenge for humans is to reach and explore the depths of our planet’s oceans.”