Windows 7 Gets Rid of the Gimmicks 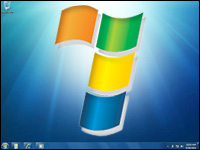 Is it damning with faint praise to say that Windows 7 is definitely not Windows Vista? Probably. After the misfire that was Microsoft’s previous operating system, those words alone may be enough to push consumers off the computer-buying fence — when you couple them with the bargain-basement deals that await PC shoppers over the next few weeks.

However, it just so happens that after seeing demonstrations from Microsoft officials and getting a couple of days alone to play with the software, I’ve decided that Windows 7 is a better operating system than Vista or, for that matter, Windows XP. It’s free of goofy widgets and show-offy features, stripped of some of the more annoying endless security warnings and dialog boxes that popped up on your desktop like weeds following a good spring rain. I couldn’t test every single device and application in the tech universe with the 2006-era Dell D620 laptop chosen for this review, but it did pass compatibility tests with a printer, another Windows laptop in the house and a previous-generation Zune I had lying around.

I know that device and app compatibility — or lack thereof — were two of the biggest user complaints about Vista, and that Microsoft is running ads right now showing average computer users telling the camera how they helped create Windows 7 with their suggestions for improvements. I’m sure that Redmond read all the same tech reviews blasting Vista that the rest of us did, but the rest of us didn’t also hear the criticisms that came from top executives at Dell, HP and Acer regarding Vista. Those had as much to do with the trip back to the drawing board for Windows 7 as a chorus of consumers complaints did — after all, even with the rise of Google Docs, Linux, cloud computing and smartphones, the computer industry’s fortune are still tied to Microsoft. Eighty-five percent market share will do that to you.

So the industry can let out its collective breath — Windows 7 isn’t Vista, and parts of it are much better.

Homegroup and Play To

Granted, the Dell D620 laptop I was using wasn’t loaded down with extra memory-draining apps or other third-party software. However, boot-up time with Windows 7 was still well within 30 seconds, and shutdown was about 20 seconds. The software was also very quick to recognize and connect to my home wireless network with a minimum of clicks, a product of the new Homegroup feature that helps Windows 7 recognize devices and other PCs in the house.

The revolving carousel of windows that Vista users saw when they opened up several Web pages and applications has mercifully gone the way of the dodo. Instead, Microsoft has taken (stolen?) a page from Apple by focusing everything on a taskbar, which can be used to view miniature versions of Web pages, open documents and launch applications along with media offerings in Windows Media Player. This does make for a cleaner, less-cluttered computing environment — as Mac OS X users have known for some time. Just mousing over a preview box in the taskbar can make it full screen; no clicks required.

My visit to a Microsoft mock-up of a home for a demonstration of Windows 7’s Play To feature let me check out how media can be run and moved around from PC to PC, and from PC to the flat-screen HDTV in your living room. Play To instantly recognizes the other Windows 7 PCs in the home, as well as any Xbox 360. There’s a lot to like about this if you want to use one computer to manage all the music and videos your family will enjoy, but the other PCs have to be running Windows 7 as well. Also, I wasn’t able to see if a Windows 7 PC could also help manage all the services that can be viewed over Xbox Live, which is a key component of Microsoft’s strategy for making the gaming console a home entertainment hub.

Speaking of gaming, parents who wonder just how much blood and violence the kids in the house will be exposed to on video games will appreciate new parental control features that can set time limits on separate accounts for computer users, as well as a game-playing permission system tied to ESRB (Entertainment Software Ratings Board) ratings — Mom and Dad can determine is the kids should play games rated E for Everyone, T for Teen and so on.

Something different I noticed in how all the media is managed within Windows 7 versus previous OSes: You now store documents, music, video and pictures in “library” folders. There is also something called an “Action Center,” which reminds you if you need to update antivirus software and always provides a handy “troubleshooting” link. This could very well take the place of those endless “are you sure you want to click on this or download that” dialog boxes in terms of providing warnings to users.

Some minor enhancements in the pop-up menu (accessible by clicking on the Windows logo at the bottom left of the screen) got my attention: a “snipping tool” for instant copying of documents and turning them into GIFs and JPEGs; a magnifier button for zooming in on images or words. They’re not life-changing or drastic innovations, and they may have already been done by others, but it shows that someone at Redmond is trying to put a little devil in the details, which I like.

Windows 7 has multi-touch support, and a Microsoft spokesperson told me that some computer makers are coming out with touchscreen laptops, desktops and all-in-one PCs that take advantage of this feature. This clearly shows that the work done by Microsoft’s Surface labs is working its way into more consumer-friendly applications. Will those same consumers be ready to interact with their PCs the same way they’re doing so with their smartphones? I got a chance to play with an current-model HP touchscreen all-in-one desktop with Windows 7, and manipulating pictures was fun, but required a bit of a learning curve. Who knew I would need training in running my fingers across a computer monitor?That’s a skill my 3-year-old son manages quite easily, especially after a messy lunchtime.

Microsoft appears to have cleaned up its own Vista mess with Windows 7. There may be more OS competitors now than Redmond is used to, and of course Google has its Chrome OS waiting in the wings next year. However, at least for the time being, Microsoft can show off the kind of software strength it can achieve when it stays focused — and when it listens to customers.