A team of physicists at Rice University have created an “electron superhighway” that could one day be useful for building a quantum computer — a machine that would utilize quantum particles instead of the digital transistors in today’s microchips.

Rui-Rui Du, a professor of physics and astronomy, and graduate student Ivan Knez describe the new method for making the device, known as “quantum spin Hall topological insulator,” in a paper published in Physical Review Letters, journal of the American Physical Society. 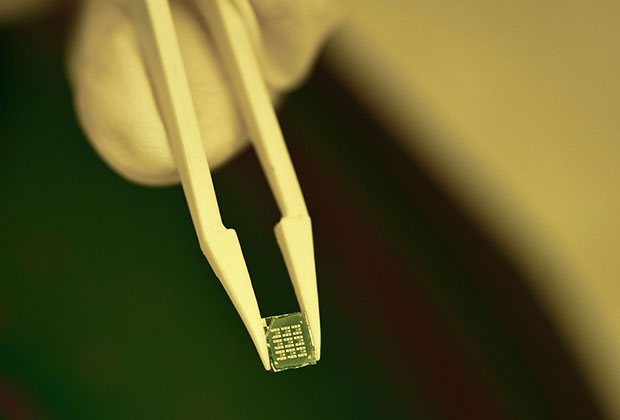 The device acts as an electron superhighway — one of the building blocks necessary to create quantum particles that can store and manipulate data.

A quantum computer would be unlike traditional silicon-based computers that use binary codes of ones and zeros. Quantum computing is based on “superpositions” and qubits that would allow a computer to store information as both zero and one at the same time. The struggle now is to make qubits more reliable, as information becomes lost over time due to quantum fluctuations, a phenomenon known as “fault tolerance.”

The new “superhighway” technology will allow intense computing tasks like code-breaking, climate modeling and biomedical simulations to be carried out thousands of times faster, the Rice physicists explained.

“In principle, we don’t need many qubits to create a powerful computer. In terms of information density, a silicon microprocessor with one billion transistors would be roughly equal to a quantum processor with 30 qubits,” said Du.

Early stages of research can be inspiring as well as frustrating.

“I’m biased towards any scientific discovery, so my first reaction is ‘cool,'” Steven Savage, technology project manager and Geek 2.0 blogger, told TechNewsWorld. “When my ‘cool’ reaction calms down, it sounds like it’s actually a very sober, interesting step to quantum computing.”

That’s just one step among many, however.

“Each step is in its own way significant,” said Savage. “This is a difficult area, and it’s being made reality by hundreds or thousands of tiny steps. What’s probably sad is that each step won’t be appreciated when quantum computing is a reality, because we’ll only appreciate the end result.”

How soon will we see the benefits of quantum computing? So far, it’s hard to tell when practical applications might appear.

Yet the promises of quantum computing are great. Moore’s Law, which states that the number of transistors that can be placed inexpensively on an integrated circuit doubles approximately every two years, has been strained in recent years. Quantum computing could change that.

“This could give us more efficient, faster, and smaller computers,” said Savage. “It’ll ramp up everything we’re doing now even further.”

While the advances at Rice University may bring us closer to a day when we might use quantum computing, there is still plenty of work to do and plenty of breakthroughs to accomplish.

“I think quantum computing an idea that bears looking into. It’s research that has been going on for a while,” Charles King, principal analyst at Pund-IT, told TechNewsWorld. “A number of people have taken different approaches to it. They’re working on the subatomic levels to extend Moore’s Law.”

“From the standpoint of silicon, we will get to the point where we can’t get any smaller,” said King. “Quantum offers a family of technologies that could be exploited to overcome that. Will it happen anytime soon? Probably not. For applications, we’re probably decades away. I wish these guys the best, and it will be interesting to see what comes down the pike over time.”