The doors to the Las Vegas convention center opened Thursday, and theConsumer Electronics Show is now officially in full swing.

I’m in no position to do an official head count, of course, but the crowd seems just a little thinner than it did last time I was here. Sure, there are the occasional bottlenecks with the crowding and the elbows and the coughing right next to your face, but certain parts of certain halls just seem kind of dead. I can find places to sit in the press room and the slop stands. Is it really less crowded? Perhaps the constant message from exhibitors (“Yes, it’s economic Armageddon, but we’re doing fine”) has tinted my perceptions. Who knows?

There’s also a greenish hue hanging over the show. Exhibitors are giving out fewer paper press kits, opting instead to give out CDs, thumb drives, or adding a “/ces” to the end of their Web sites. I’m a big fan of that last one — the less crap I have to carry around, the better — but it would be much more useful if there were greater free WiFi access throughout the center.

I dropped by Optoma to get a look at its Pico projector, which began shipping last month. This is something I’d read a great deal about but wanted to see in person.

The Pico is a US$399 DLP projector, about the size of a pack of cigarettes, that hooks up to a digital camera, iPod or iPhone. It lets you display your photos on any wall or screen, anywhere. Optoma says it’ll project images at sizes up to 100 times that of the device’s small screen.

The LED light source inside is good for 20,000 hours, which means the device will probably be well into obsolscence by the time the bulb blows. It has inputs for USB and standard composite.

Perhaps I’ve been jaded by the incredibly luminescent, huge, LED-backlit TVs I’ve been staring at for the last two days, but the Pico’s image came off as just plain limp. The photos appeared a little fuzzy, the color was drab — and this was all on a screen about 15 inches across, which is the around the maximum size you’d want to try in a lighted room, according to the Optoma rep I spoke to.

The company didn’t have it on display in a darkened area, which I assume would yield a better image. Still, 100 times larger than the source screen, even in the dark? I’m skeptical.

Even though I was left wanting more in terms of picture quality, I still love the idea of pocket-sized projectors. Maybe the next generation of the Pico, if there is one, will usher in some big improvements. Internal memory? Flash card slot? Perhaps, but Optoma isn’t talking about any specific plans just yet.

The Color of the Bulb 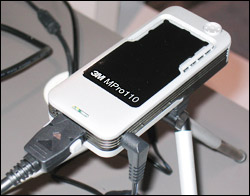 So, I crossed the South Hall to the 3M booth, where they were also showing off some small projectors.

3M’s currently available mini is the MPro110. That projector looked perhaps a little sharper in ambient light, though it could have been due to better source material (but who’d use fuzzy, washed-out pix for their product display?). I got to see 3M’s in lower-light conditions at about 15 inches, and it was definitely an improvement.

3M was also talking about the next generation. The MM200 on display is still a prototype, but it noticeably improved the image’s color quality. That, I’m told, is due to the RGB LED it uses; the MPro110 uses a white LED.

It’s also smaller and thinner than the MPro — little enough to cram into a smartphone or portable media player, for instance — and 3M is talking about selling the hardware out to other manufacturers for use in whatever devices they can come up with.