A couple of weeks ago, talk surfaced of a super-thin and super-brightphone in the works from LG. Despite whatever happens with theso-called “LG B,” it won’t be the only handset around with a brightsmile and the thin waistline.

At Samsung’s CES event Wednesday, Omar Khan, CSO of SamsungTelecommunications America, whipped out the Infuse 4G, what he called “thethinnest phone in the AT&T portfolio.” That would mean it’s slimmerthan the iPhone 4, which itself boasted the thinnest form factoraround when it was launched last summer.

The Infuse also touts a 4.5-inch Super AMOLED display, an 8 megapixelrear cam, a front cam for video chat, and a 1.2 GHz processor. It runsAndroid 2.2. 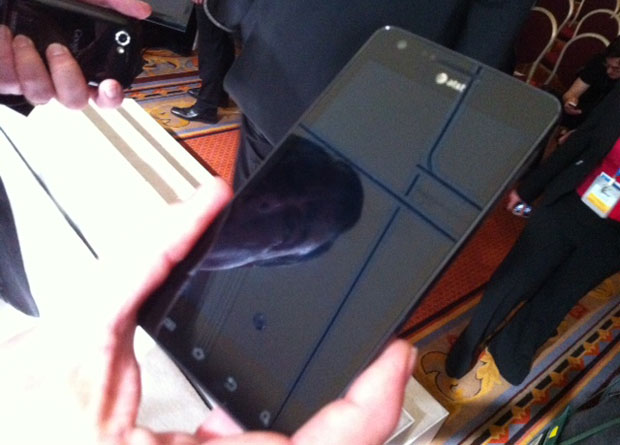 In other Android news, Samsung also gave a mention to its upcomingGalaxy Player. It’s a Google-certified personal media player runningAndroid 2.2 — in other words, a Galaxy S phone without the phone.

Offering an Android system that doesn’t come with the high monthlywireless bills smartphone users have to pay could help build a largeruser base for the mobile OS. For teens and other users who aren’t yetready to make the jump to a smartphone, a PMP with a real mobile OSthat runs apps is an attractive option. A lot of these customers willstay with the OS they’re used to when it’s time to upgrade to asmartphone.

The Galaxy Tab also got a moment of stage time with the announcementthat a WiFi-only version of the tablet will be coming in the firstquarter of the year.

Televisions got their due at Samsung’s event as well. David Steel, EVPof Samsung Electronics North America, acknowledged that there’s beenmuch discussion about the future of 3D TV and whether it’s taking offas quickly as companies had hoped it would at this time last year.

3D remains a focus for the company — in fact, 3D TV sales havesurpassed the initial uptake of technologies like DVD, HDTV andBlu-ray, according to John Revie, SVP of Samsung North America.

However, in the television category, more energy appeared to be focused onnew technologies not necessarily related to 3D. Samsung showed off aline of sets that are nearly bezel-free (two-tenths of an inch), aswell as its new “1-Foot Connect” system, which lets users easilytransfer content between Samsung TVs and other devices more easilythan via WiFi.