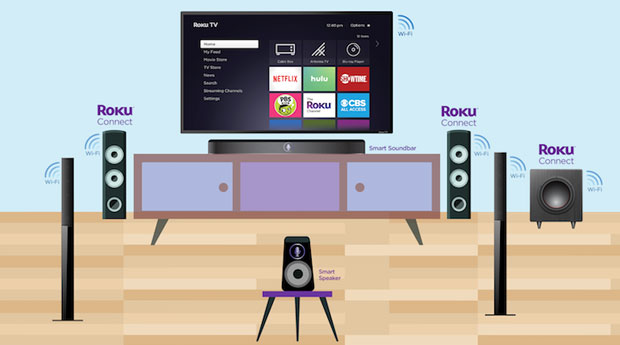 Roku on Wednesday announced new software and a licensing agreement for OEMs to develop smart speakers, soundbars and multiroom audio systems that will allow customers to control their home entertainment devices with simple voice commands.

Roku has entered an agreement with TCL, its main technology partner, to roll out the first device under the new home entertainment partnership. The companies plan to unveil that initial device next week at CES.

“We’ve always focused on making it incredibly simple for consumers to find and enjoy streaming entertainment on their TVs, and with an expanded Roku ecosystem, consumers will be able to enjoy great sound to their TVs and audio around the home in a modern way,” Roku CEO Anthony Wood said.

The company first unveiled its licensing program four years ago, allowing OEMs to develop televisions and other products that worked with the Roku streaming devices.

OEMs will be able to choose from four different options:

Roku TVs account for one out of every five smart TVs sold in the U.S. during the first nine months of 2017, the company said. Roku and Funai Electric also announced that Magnavox has become its ninth OEM partner, with plans for a new smart Roku TV this spring.

Funai is the exclusive licensee for Magnavox and Philips consumer televisions and home video products in the North American market. Roku already has a TV licensing agreement with the Philips brand.

Apple last summer announced plans for a high end smart speaker, called the “HomePod,” but said late last year that the release date for the device would be delayed until after the new year. The company did not provide a reason for the delay.

The Roku announcement is not likely to have a huge impact on the overall smart speaker market, but it could give the company some additional leverage against other players in the streaming video space.

“I don’t think [Roku is] a threat at all,” said Adam Marchick, CEO of VoiceLabs.

“Amazon Prime and Netflix will be very happy to tap into Roku connect voice controls,” he told TechNewsWorld.

While Alexa is widely used throughout the industry, Marchick can see a scenario in which Netflix develops voice recognition search capabilities using LEX and puts that on top of Roku technology.

Roku probably would prefer the capability be built on top of its own API, but the playing field is wide open, he said, and new partnership announcements in the area likely will be forthcoming at CES.

“Being able to control a device by voice is already being used by Comcast and other remote controls,” noted Kevin Krewell, principal analyst at Tirias Research.

There may be an opportunity for more consumer devices that use speech recognition technology on the front end, suggested Paul Teich, also a principal analyst at Tirias.

However, it would be difficult to make a big dent into Amazon or Google’s market position, he told TechNewsWorld.

“Roku will need to pass voice through to Alexa and Google Home APIs to be successful,” Teich said. “Roku is simply not gathering speech recognition or context-sensitive usage data on the scale of the other two services, and it can’t lead on anywhere near the level of Amazon or Google’s domain expertise for shopping, maps, search, etc.”

“The Roku deal is interesting, but it is unlikely to significantly alter the balance of power in the streaming video market,” said Tim Mulligan, senior analyst at Midia Research.

“Voice is still a nascent technology — yet Amazon’s Echo product is already significantly benefiting from enhanced brand awareness and the network effect of being part of the Amazon ecosystem,” he told TechNewsWorld. “For these reasons, Amazon is best capitalized to make voice work as a consumer proposition in the streaming video market place.”