Few earthly ag tech environments — at least in the United States — come more controlled than the Houweling’s Tomatoes Ultra-Clima greenhouse facility in Camarillo, Calif., where the company produces a broad range of tomatoes and cucumbers grown hydroponically under glass across 125 acres.

Houweling’s is a family-owned company that operates a total 175.5 acres of high-tech hydroponic greenhouses in Delta, British Columbia, and Camarillo, where it runs California’s preeminent large-scale, energy-neutral vegetable greenhouse.

Houweling’s collaborated with the Dutch company KUBO in the development and construction of the US$53.25 million Ultra-Clima greenhouse, a 23-ft.-tall, closed, pressurized, tempered-glass greenhouse structure designed specifically for use in hot and arid climates. Among its features are optimized humidity and temperature control, light-enhancing design, diminished pest pressure, higher CO2 levels inside the greenhouse, greater air buffer due to building height, and minimal water and nutrients usage through recirculation.

In 2012, Houweling’s Tomatoes installed a GE combined heat and power greenhouse project that captures CO2 for use in plant fertilization. The heat-and-power cogeneration system captures traditionally wasted heat, water and CO2 for use within the greenhouse. The system — which provides 8.7 MW of electrical power and 10.6 MW of thermal power for heating the greenhouse — was the first greenhouse CHP project in the U.S., the companies said.

Would Houweling’s consider its Camarillo greenhouse operation to be the state-of-the-art in controlled environment agriculture, or CEA?

The heart of CEA is the “intelligent greenhouse” — a sophisticated, precision engineered, solid-state, controlled climate growing space that provides optimum conditions for crop growth. There are numerous examples of the “brains” behind Einstein greenhouses.

Climate Control Systems, for instance, has been manufacturing greenhouse automation systems since 1985. The company’s product lines include the Climate Manager, Fertigation Manager and Fertigation Water Treatment Systems. These products are designed to help growers with commercial greenhouse operations maximize crop yields and help with water conservation and energy savings.

The PC-based Growtronix System, meanwhile, is an all-in-one grow room controller. It enables growers to monitor their growing climate with the option of continuously graphing the data from temperature and humidity sensors. Also on hand are a Web interface for remote monitoring and control plus an iPhone app that enables growers to get emails and text messages to alert for real-time smoke and flood detection, motion detection, open doors or windows, out-of-range temperature or humidity, low CO2, low nutrient reservoirs, too high or too low pH, and more.

“Vertical farming” — a pillar of the Urban Ag movement — is a process that controls space and light to increase plant yields. The idea is to use an entire space rather than just horizontal and upward planes, for cultivating plant (or animal) life on vertically inclined surfaces or in buildings. Within the buildings, growers build tall structures with several levels of growing beds lined with artificial lights.

Indoor vertical grow rooms can be designed for any space, from as small as a closet to as large as an entire enclosed edifice. In an indoor environment, the space must have growing efficiency and maximum light coverage. Growing plants have changing light needs and a good lighting system maximizes the amount of light coverage for each stage of plant growth. An advantage of vertical grow systems is that the plant is not forced to grow in one direction. Light reaches more plant surfaces, creating higher crop yields. 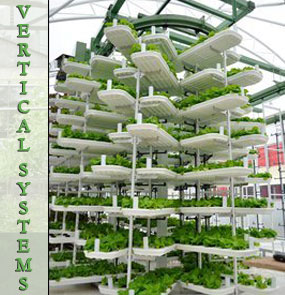 “Vertical systems for hydroponic grow rooms are an adaptive application of a very old idea,” Haas told TechNewsWorld. “Vertical stacking units produce higher yields per each square foot of growing space because space is conserved for plant growth in many directions. Vertical stackers are rotated or rearranged to promote the best configuration for light coverage. Space is reserved near the top of the grow tent, box, or room for exhaust and cooling systems.”

There are no “clear bests” in the world’s CEA systems, only ones that are designed to fit the needs of the plant within the grower’s production practice and within the local climate conditions and greenhouse system, said Gene Giacomelli, director of the Controlled Environment Agriculture Center and a professor in the Department of Agriculture and Biosystems Engineering at the University of Arizona.

Greenhouses, like growth chambers or other indoor production systems, provide for the aerial environment (temperature, humidity, CO2, light, etc.) required for the production of the plants and crops.

“Hydroponics, aquaculture, aquaponics, aeroponics or ‘whatever-ponics’ are technologies that provide for the water and fertilizer nutrition needs of the plant,” Giacomelli told TechNewsWorld. “They can be used with or without CEA, although they perform best when in CEA. Obviously both the root zone and the aerial climates are controlled for the potentially best growth.”

An optimum greenhouse and hydroponic system offers a computer-monitored and controlled climate; an automated and recirculating fertigation system; and a labor-efficient management strategy and plant-based management control, he said.

“In essence, there are many ways to grow a crop, in many types of greenhouses, with some easier, cheaper and more productive, while others may be less so,” Giacomelli said. “You pay a price for quality of product and production yields.”

Urban Ag Tech Only Part of the Equation

Technology alone does not fully drive the CEA business — it is a component of the business, according to Danilo Lopez, principal at Novelle Consulting.

“The location, the market, the microclimate, land availability, city or county regulations, competition, etc., will have to be part of the total economic equation,” Lopez told TechNewsWorld. “Here, overall competitiveness in the U.S. market — versus Florida and Canada in winter, and versus other U.S. producing areas and Canada for the balance of the season — would drive the producer’s decision on what technology to use.”

“Throughout the history of agriculture, the farmer has had to deal with the various aspects of unpredictability,” Kawamura told TechNewsWorld. “CEA greenhouse technologies and the business models that they offer move towards bringing more predictability into the process of reliably growing and marketing a crop.”

Indeed, “there is energy required to grow food in a controlled environment structure, but if the growing system is designed properly, the output of food is much higher than outdoor soil production and with staggered planting, you can harvest every day of the year,” Rebecca Nelson, co-owner of aquaponic technology vendor Nelson and Pade told TechNewsWorld. “Plus, you can set it up close to marketplaces so that you eliminate the cost of long distance trucking.”

Yet despite the promise of modern technology, sometimes it just isn’t enough, suggested Melissa Brechner, director of the CEA Hydroponic Technology Transfer Center in the Department of Biological and Environmental Engineering at Cornell University.

“There are situations with respect to CEA where all of the technology is appropriate, but many are very energy-intensive, and I might not recommend undertaking such a project even though it may be possible with the technology we have,” Brechner told TechNewsWorld.

“The thing we struggle with the most is to convey to potential CEA owner/operators that one must consider the business aspect of the venture with as much care as the engineering aspects of the project,” she added.

Tim Madden follows a strategy of using the best technology available at the time of a CEA project his company is undertaking because new developments always overtake whatever designs and systems that are currently considered “state-of-the-art.”

“No one wants to invest in technology that has not been proven viable on a commercial scale for several years,” said Madden, president of BiodynamicsCEA, which specializes in renewable energy and sustainable agriculture business solutions.

“Nor do they want to invest in obsolete technology,” Madden told TechNewsWorld. “So, it is difficult for investors to be comfortable with the proven success of the technology weighed against its current competitive advantages and how long they may be competitive in the commercial markets,” explained Madden. “In the end, it all comes down to the proven success and reputation of a company and people the investors are working with — not the technology.”

Still, “the most important thing to keep in mind about all this technology is that you are not turning on a widget machine that stamps out the same widget, time after time,” Peter Overgaag, CEO of Hollandia Produce, told TechNewsWorld. “You are dealing with temperamental living plants that require constant attention and adjustments.”