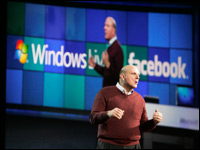 Steve Ballmer’s presentation Wednesday evening at the Consumer Electronics Show in Las Vegas was free of the dancing, screaming, sweaty antics he’s sometimes known for when he takes the stage at conferences and conventions. Instead, the Microsoft CEO’s first CES opening keynote speech laid out his company’s vision for the year ahead as Microsoft and its many hardware partners gird for a bleak consumer spending landscape.

“It feels like we’ve entered a period of reduced expectations, a time when we may be tempted to temper our optimism and scale back our ambitions,” he commented.

However, he maintained Microsoft will continue investing heavily in research and development, focusing on the convergence of the PC, the mobile phone and the television; the inclusion of easier-to-use interfaces like touch and speech; and the pursuit of what he called “connected experiences” — a greater sharing of data between devices via the cloud.

Looking toward the immediate future, Ballmer promised the worldwide availability of the Windows 7 beta this week. This will be the first official release of the beta but not the first the world at large has seen of it — copies of the operating system test version have been available for several days on file-sharing networks without the company’s express approval.

Ballmer also announced the availability of a final version of Windows Live Essentials.

Microsoft’s demonstration of Windows 7 focused on simple features designed to navigate a cluttered desktop more efficiently and move between programs and their specific functions with fewer clicks and less mousing around.

Windows 7 will also include Home Group, a feature for setting up a home network that allows sharing content like video and music between devices in different rooms. Such a network can be made already, but Home Group looks to simplify the process.

The company’s Windows Live demonstration showcased an array of features designed to tie together the user’s various social networking circles. Going to one’s home page on Live will show the user a sort of meta-feed — a newsfeed of all the updates in their accounts on sites like Flickr, Yelp, Twitter and, now, Facebook. Microsoft said the feature covers over four dozen partner sites.

The Game of Live

In gaming, significant price cuts guided the Xbox 360 through what was overall a difficult holiday sales season. In fact, 2008 was actually the Xbox’s best holiday period ever, noted Robbie Bach, president of Microsoft’s entertainment and devices division.

The “Halo” franchise, an exclusive Microsoft title, has been a cash cow for the company’s game platform over the years, and naturally the company intends to continue milking it. A new “Halo” game release has the power to significantly drive Xbox sales, as well as memberships to the console’s online Xbox Live platform. The average online “Halo” player has logged about 150 hours of Live combat, according to Microsoft.

Bach promised two new titles for 2009: “Halo Wars,” described as a T-rated strategy game, will come in February. The more traditional “Halo 3: ODST” is also in the works.

Plans for Xbox Live involve adding more interactive content, including something called “PrimeTime,” set for launch this spring, according to Bach. PrimeTime will feature live programing rather than prerecorded shows and movies. It will also allow the user to participate — for example, by taking part in a PrimeTime version of a game show like “1 vs. 100.”

Looking farther into the future, Microsoft put its games and social life aside to focus on education rather than a flashy consumer product. The company demoed a concept electronic, Web-connected textbook as it might be used by someone taking an anatomy class.

Starting with a simple illustration of the bones in a human hand, the user can use a touchscreen to instantly access reams of automatically cross-referenced support materials — no search required. Related course curricula, articles from medical journals, notes from study group partners, and related charts and diagrams could all be drawn from the Web and even analyzed automatically to determine relevancy.