EU Grouses at Google Over Privacy on Its Streets

The European Union has requested that Google make some changes to its Street View service. It wants Google to delete the images that it captures after six months, according to a letter sent to Google from the head of the EU Article 29 Data Protection Group, which is comprised of data protection officials from EU countries. 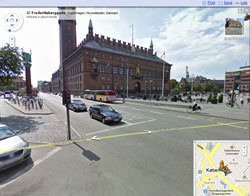 It also wants Google to alert residents when its Google Street View cars will be in the area. Google takes the photos for this service, an add-on to its Google Maps and Google Earth application, using cars that drive up and down streets and roads.

Google is working with the EU to explain why it needs to maintain images for 12 months, said Google privacy counsel Peter Fleischer in a statement emailed to the media. Those reasons include being able to rectify past mistakes and being able to build better mapping products.

Google has become the focus of considerable attention in Europe lately — most recently when three firms lodged complaints with the EC about its search ranking algorithms. Also, three of its top executives — including Fleischer — were recently convicted of violating Italy’s privacy laws because Google allowed the posting of a video showing an autistic youth being bullied to its now-defunct Google Video service. The video was taken down when Italian police brought it to Google’s attention.

While it may seem as though Google is being singled out, there is a case to be made for the EU’s request regarding Street View, Rob Enderle, principal analyst of the Enderle Group, told TechNewsWorld.

“The belief that Google Maps was being used by burglars was widespread in Europe, and it is this that is likely driving the response,” he said.

Also, other search engines — most notably Microsoft’s Bing — have indicated they would comply with this six-month rule. Last month, Microsoft said it would change Bing’s search data retention policies and hold users’ IP address data for only six months instead of 18.

Good for the Goose

Google has responded to the EU’s past complaints about Street View, Ryan Radia, an analyst with the Competitive Enterprise Institute, told TechNewsWorld.

“If someone doesn’t want their house included on Street View, Google will remove that image,” he pointed out. “It has also made accommodations to blur people’s faces, licenses plates and sensitive images such as pictures of couples captured in the street.”

The European Union is pushing the boundaries of its privacy mandate, he continued. “Everything Google is doing is from the public street, taken of images that can be seen in public.”

While the Europeans are not deliberately singling out Google or trying to pick a fight, their latest requests do smack of hypocrisy, in Radia’s view. “Europe has some of the most aggressive data retention laws on the books for government purposes. … The United Kingdom is very aggressive in monitoring its people with webcams and cameras on the streets for the purposes of homeland security.”

Ironically, Peter Fleischer, Google’s global privacy counsel, recently remarked on some of those policies in an unrelated blog post.

Earlier this year, he was looking out of a Paris window at the passing people speaking on their cellphones, and wondering how many might be thinking about how their location data was being captured, stored or used by the government, he wrote.

“EU countries began passing the Data Retention laws mandated by a European Directive. That means that massive databases of communications logs will now be collected and stored by communications service providers across Europe for 6 months to 2 years, for police and law enforcement purposes — France, for example, chose 12 months,” wrote Fleischer.

“This is the largest police surveillance database ever mandated in the history of humanity to date,” he continued. “For most people, I imagine, the most sensitive aspect of this is the idea that their physical movements can be tracked by the police over long periods of time.”