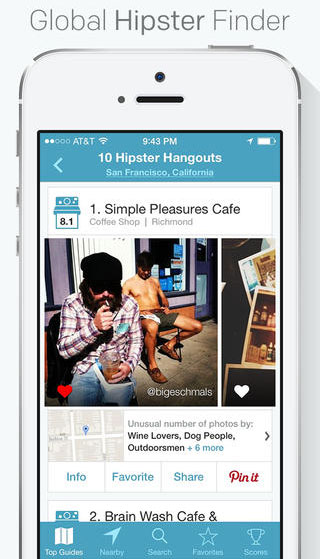 Google has acquired Jetpac, according to a statement that appeared Friday on the Jetpac website.

Jetpac is the creator of a handful of apps, including City Guides, which analyzes Instagram photos and then automatically creates guides based on the collected data.

That information translates into a lot of options for users. They can find bars that attract a younger crowd, the most scenic hiking trails, or the hippest coffee shops, for example.

Jetpac has covered some 6,000 cities around the world using this approach. It analyzes “every pixel of the world’s Instagram photos to give you the real picture of fun places,” its website proclaims. “We can spot hipster mustaches, lipstick and the biggest smiles.”

City Guides and Jetpac’s other apps will be removed from the iTunes App Store by September 2014. Jetpac’s staffers will reportedly join Google’s Knowledge team, which focuses on real time search.

Google has not said what it will do with Jetpac’s technology or talent. In the big picture, almost any tech acquisition is a viable one for Google, considering its very broad approach to market.

“Google is interested in leveraging the digital infrastructure of everyday life, and this fits into that strategy,” Rich Hanley, associate professor and director of the graduate journalism program at Quinnipiac University, told TechNewsWorld.

However, close scrutiny of the intelligence Jetpac has built around its photo analytics and aggregation tools leads to a number of interesting ideas about what Google might have in mind.

Jetpac’s real-time local object recognition could, be applied in Google Glass or Goggles, for example. It also could be used to enhance Google’s image search.

Google could use Jetpac’s foothold in the travel industry to push further into that space, much to the industry’s chagrin. Earlier moves by Google to develop greater creds in travel were met with dismay and resistance.

When Google announced in 2010 that it would pay US$700 million to acquire ITA Software, the travel industry formed a group to block the sale. That effort ultimately failed when the Department of Justice approved the acquisition the following year.

Jetpac’s quirky list of best places to visit for this and that also fits well with Google’s search and mapping prowess.

More than likely, though, Google’s acquisition of Jetpac is about the talent.

“The Jetpac acquisition by Google is apparently one of these “acqui-hire” events,” said Vlad Zachary, director of omni-channel at Upshot Commerce.

“There is no immediate business play, and the plan to shut down the app by mid-September shows that the Jetpac team and perhaps some of the Jetpac algorithms for analyzing visual data are the real targets here. We can speculate that Google is coming out with a similar service, but that’s all it is — just a speculation,” he told TechNewsWorld.

The one bit of speculation that has been circulating and that makes sense, Zachary said, is the idea that Jetpac will be integrated with Google Maps.

Google Maps has outgrown the standard definition of “location app” and is used more for navigation, he observed. “Increasingly, they offer value-added search, which includes local landmarks, small businesses, and yes — pictures.”

For instance, if you were in the Boston area and typed “concerts” into the Google Maps search field, you would get a list of attractions that included all types of venues — from pubs to the Gillette Stadium, Zacharay pointed out.

Then, if you tapped on the entry for Gillette, you would find reviews, distance from current location, user pictures, and tons of other information.

“Can the team from Jetpac help use this information better?” Zachary mused. “I would bet on ‘yes.'”