India’s Ministry of Human Resource Development has unveiled a prototype of a touchscreen computer that will initially cost US$35. Eventually, Minister Shri Kapil Sibal said, the price will drop to $20 and then $10. 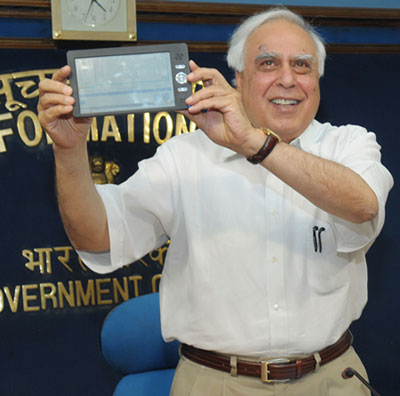 “I think — assuming the device does come to market — that there will be some unexpected demographics interested in it,” he added.

In photos, the device looks much like the sleek tablet-style PCs coming on the market and typified by the iPad. It will offer such standard functionality as word processing, Web browsing and video-conferencing.

It is aimed at university students, with delivery planned for 2011.

At $35, the computer is cheaper than most digital cameras, raising the question of how India — or rather, the manufacturer it must engage — could possibly be able to pull off this feat.

How to Build a Very Cheap Computer

For starters, the device will run on a Linux operating system.

Originally, the Ministry had turned to the corporate sector for research and development, but it found support for the project “lukewarm.” It moved on to the sector where the device is intended to have its impact — the educational system — and received better responses from the universities.

Students devised a motherboard that is flexible enough for the components to change, if need be. Other innovations touch on the processor functionality. Reportedly, it won’t have a hard disk, using but will use a memory card instead.

Presumably it will be manufactured in India, which means inexpensive labor, Laura DiDio, principal of ITIC, told TechNewsWorld.

“They certainly won’t be using state-of-the-art parts either,” she said. “There also won’t be the huge markup that such retailers as Apple typically charge with their products. In theory, it is doable.”

The question is, how good will the quality be? At $35 or less, no one is expecting another iPad, but DiDio thinks these devices are intended to be disposable, although the government and manufacturer are unlikely to say so.

“At $35, I think most Indians who could afford that price in the first place would simply throw it away and get another. I doubt if there would be much service or support, or warranties accompanying their sale.”

With India’s immense population, there is certain to be a market there for the device. Still, it would be a mistake to assume all university students will want one — or that it will appeal only to students, DiDio said.

It can be assumed that university students in India who are financially struggling or otherwise on a tight budget would gravitate toward a cheap computer. So might the parents of younger students in middle or elementary school.

They might want to give their kids an inexpensive starter computer, DiDio noted. Another ripe possibility could be the emerging markets in Africa, where cellphones and smartphones are starting to take off.

Yet a wide swath of potential buyers won’t be interested in the device.

The North American and European export markets can be counted out, said Steven Baker, VP of industry analysis for NPD.

“It is not the kind of product that people want here,” he told TechNewsWorld. “The concept is just not exportable to these markets.”

It is also not a given that all university students will want the device, DiDio stressed.

“India churns out some of the world’s best engineers,” she pointed out. “I can’t imagine a math or science or engineering major using a computer like this.”