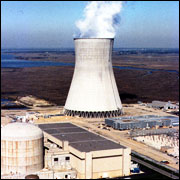 There’s no denying that safety and effectiveness are both critical concerns when it comes to nuclear power, and that’s just as true for investors in the technology as it is for those who rely on the energy it generates.

Part 1 of this three-part series describes a new generation of small modular reactor designs whose promise is undeniably compelling. What’s less certain, however, is whether they are feasible as a free-market business proposition without current levels of government-backed investment.

That’s the question at the heart of what’s sometimes called “nukenomics,” and it’s a complicated one.

Even giant corporations in the nuclear energy industry are cautious about the fiscal viability of the nuke space. Construction cost estimates for new nuclear power plants are highly uncertain.

However, construction costs are just the beginning. Billions of dollars are spent in operating performance, fuel price, waste disposal and other factors.

Analysis of the economics of nuclear power must take into account who bears the risks of future uncertainties. To date, all operating nuclear power plants worldwide have been subsidized by governments and developed by state-owned or regulated utility monopolies.

Most of the risks associated with nuclear power plants have been borne by taxpayers and ratepayers rather than suppliers, in other words.

With a Little Help From the Feds

NuScale Power, which is now seeking federal funding for the deployment and commercialization of its SMR technology, originally developed its design with a Department of Energy grant in 2000. Further refinement was made possible by backing from Oregon State University, and the firm secured the patents by giving OSU an equity stake.

“The availability of federal matching funds will support the significant development costs for our technology, which requires a very long-term commitment before any revenues can be generated,” Mike McGough, NuScale’s chief commercial officer, told TechNewsWorld.

“The time frame for NuScale to receive a certification of our design from the NRC, as well as a license to construct and operate, is in the range of six years from now,” he explained. “This will be an important indication of support . . . and the potential creation of an enormous exportable U.S. technology to regain the U.S. lead in nuclear technology.”

Geography figures heavily in calculations of risk for domestic nuclear power plant development, according to the Nuclear Energy Institute.

“The economics of building new nuclear energy facilities varies from region to region, and the regional markets will determine when new plants will be built,” said Steve Kerekes, a spokesperson for the NEI.

“In the U.S. South and Southeast, state legislatures and regulatory commissions provide the assurance of cost recovery necessary for capital-intensive projects,” Kerekes told TechNewsWorld. “They also allow companies to recover financing costs during construction, which eases stress on cash flow and reduces the rate increases necessary when the plant goes into service.”

Insurance protection is another enormous factor. In accordance with the Price-Anderson Nuclear Industries Indemnity Act of 1957, nuclear power in the U.S. has been granted indemnity from the burden of carrying full third-party insurance liabilities.

The limited insurance that is required does not cover the full multibillion-dollar costs of a major nuclear accident of the sort that occurred at Chernobyl or Fukushima, according to the Union of Concerned Scientists.

In fact, Price-Anderson significantly shifts accident and security risks from industry to taxpayers by limiting the primary insurance a nuclear plant owner is required to carry to $375 million, the UCS charges. In the event of an accident, each nuclear plant owner is assessed a prorated amount for a pool totaling $11.6 billion.

The federal “open wallet” strategy for nuclear energy was fully apparent in the U.S. Energy Policy Act of 2005, which not only extended Price-Anderson through 2025, but also provided the nuclear industry with financial incentives to build new nuclear power plants. Among other incentives, the act provided a production tax credit of 1.8 cents per kilowatt hour for up to 6,000 MWe of capacity from new, qualified advanced nuclear power facilities for eight years.

The first application for a new reactor eligible for this incentive was submitted in September 2007 for an expansion of the South Texas Project.

Later, under an amendment in the American Recovery and Reinvestment Act of 2009, Section 406, the Energy Policy Act of 2005 authorized loan guarantees for “innovative” technologies that avoid greenhouse gases. These technologies include carbon capture and storage, renewable energy, and advanced nuclear reactor designs such as pebble bed modular reactors.

One result is that tax reductions of $4.8 billion were made available for nuclear power.

President Barack Obama, who has received throughout his political career significant campaign contributions from the nuclear industry, has consistently been an outspoken advocate for nuclear power.

Of course, what can be given can also be taken away.

An FY 2014 budget put forward by the administration in April 2013 cut funding for a key plutonium reprocessing facility in South Carolina that transforms weapons-grade plutonium into usable commercial nuclear reactor fuel, and which is a component of the United States’ international nonproliferation efforts. The budget included only $503 million — $183 million less than was provided under last year’s continuing resolution, when Congress failed to pass a budget.

In February, Taxpayers for Common Sense handed out its “Golden Fleece Award” to the DoE for the dollars being spent on SMRs.

Why the dubious honor?

The DoE has already provided nearly $100 million for SMRs, while their commercial viability remains in question, the group charged. In addition, DoE has committed up to $452 million over the next five years to fund up to two separate demonstration projects.

If DoE believes there is a “need and market” for SMRs, the mature and profitable nuclear industry should bear the full risk and cost of making SMRs a reality, Autumn Hanna, TCS’s senior program director, told TechNewsWorld.

Can the Industry Stand on Its Own?

Other nuclear watchdogs remain cautious about embracing innovations such as SMRs.

“SMRs are just the next chapter in a nuclear industry that can’t stand up on its own,” said Don Hancock, director for nuclear waste safety at the Southwest Research and Information Center, “so it always has to be funded by the government.”

Even if some risks are reduced, “pocket nukes” would still be more dangerous than wind, solar and other renewable energy, according to UCS. They’re also much more vulnerable to use by terrorists.

Perhaps even more sobering, though, is nuclear power’s true cost.

“Subsidies to the nuclear fuel cycle have often exceeded the value of the power produced,” concludes a UCS report released in 2011, “Nuclear Power: Still Not Viable without Subsidies.” The report attempts to take into account all the costs and risks shifted from the nuclear industry to government and ratepayers over the past 50 years.

“This means that buying power on the open market and giving it away for free would have been less costly than subsidizing the construction and operation of nuclear power plants,” the report observes.

Indeed, the claim that nuclear power is “inexpensive and affordable” is meaningless, Jerry Taylor, senior fellow at the Cato Institute, told TechNewsWorld.

“Even with the plethora of federal tax breaks, loan guarantees and the like, no one in the United States is ordering any of these new facilities,” Taylor said.

“Inexpensive and affordable relative to what?” he asked. “There are plenty of cost estimates out there regarding what a new nuclear power plant will cost. Unfortunately, all are handicapped by the fact that those estimates are speculative. It has been decades since anyone has tried to build a nuclear power plant in the United States.”