At 12:01 p.m. EST on Tuesday, the White House Web site underwent a transformation. The old look was out, and a brand new one, designed by the Obama administration, was in. The changeover took place without fanfare or formality. Indeed, the new site was up even before Supreme Court Justice John Roberts had administered the oath of office to Barack Obama, who had quietly undergone his own Constitutionally mandated transformation, becoming president at precisely the same moment.

More than twenty-four hours later, visitors are beginning to absorb the implications of the White House Web site’s new features, which give the people unprecedented access to government policymaking. Of course, the site will also give President Obama unparalleled access to those he governs — and will one day have to woo again, assuming he runs for a second term.

“The new bully pulpit has moved from TV to the Internet, and no one understands it better than President Obama,” Michael Bassik, chief digital officer for Air America, told TechNewsWorld.

To be sure, it was expected that the Obama administration would have a sophisticated site. Obama relied heavily on technology to win the Democratic nomination and then the presidency. Still, some of the interactive features are surprising even savvy political observers.

Obama “is trying to send a message that his administration is working for the people — that it is trying to break down the barrier that inevitably forms between a president and the citizenry,” Stephen Puschel, executive producer of public television newscast Worldfocus.org, told TechNewsWorld. “The way he is going to try to achieve this is through technology.”

Features include a blog, a page for Obama’s weekly address to the nation, which will be disseminated by online video as well, updates via e-mail, and links to other resources. The site also has a page for legislation that hasn’t yet been signed. The Obama administration plans to post new bills awaiting the president’s signature for five days, in order to give people a chance to comment. 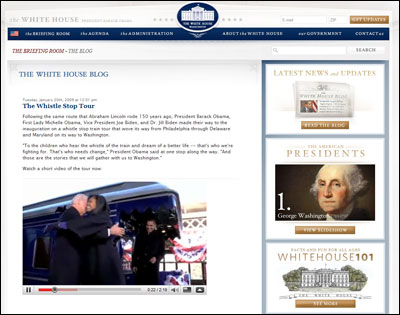 Including a blog was a smart move, David Erickson, director of e-Strategy at Tunheim Partners, told TechNewsWorld.

“While the comments have not been enabled — and for logistical purposes, among others, my guess is they will never be — the mere fact of a blog [not only] creates yet another direct channel to Americans, but also builds a relationship between the White House and our citizens,” he said.

Blogs are inherently first person and conversational, and this one appears to be no different in that regard. “That tone creates a sense of intimacy and familiarity that can build a stronger bond between the blog readers and the blogger — in this case, the White House,” Erickson said. “That helps create a larger sense of trust that can help the administration over the long haul.”

Blogs are also a superb rapid-response vehicle — so when the need inevitably arises, the administration will be able to address fast-moving issues or stories through a direct channel to the people.

The boldest move is the pledge to publish all nonemergency legislation on the site for five days before the president acts on it, Erickson said, inviting public review and comment.

“This essentially creates open source legislation that brings the ‘wisdom of crowds’ to bear on our laws,” he said. “This single feature of Whitehouse.gov has the potential to create a massive shift of power from legislators, lobbyists and interest groups to individual Americans.”

No other president has done this before, Air America’s Bassik noted — and for the most cynical of reasons. Crafting legislation is a messy affair that’s typically conducted behind doors to hide the horse-trading and industry lobbying that has been inherent to the process.

“Obama will be using the Internet to encourage more participation in — and transparency of — our government,” Bassik concluded.

Certainly, the new features have thrilled citizens who got a taste of interactive policymaking during the Obama campaign and are eager to continue providing input to his administration.

“There were many questions about whether he and his team would be able to make a huge bureaucratic institution more responsive to the people’s interests — and it seems like they are off to a good start,” Petri Darby, principal of darbyDarnit Public Relations, told TechNewsWorld.

Besides the blog, feedback form, e-mail newsletter sign-up form, and the five-day posting of all nonemergency legislation for review and comment, the new administration also is active on Twitter and other social media channels, Darby observed. “This will certainly be the most interactive administration in history. The only question is who will see the benefits of it — the administration or the American public,” he said.

“I don’t care which party you belong to, transparency is never a bad thing,” Shell told TechNewsWorld. “The new administration appears to have embraced technology and, given the results of the election, are extremely knowledgeable on how to leverage the tools at hand.”

Obama will benefit as well, he said, from the information that is gleaned from the site — or he’ll at least earn accolades for trying. “This kind of openness is something tangible people can see right away. Maybe Obama cannot fix the economy soon, but he will get points for keeping people in the loop.”

How much further can the government bring citizens into the political process? Semantic technology would ratchet up the weight of an individual’s input, observed J. Brooke Aker, CEO of Expert System USA.

With an influx of citizens participating online, semantic technology would help the administration govern more efficiently, he told TechNewsWorld, pointing to a recent project Expert System and Oracle completed for the Italian city of Bari.

The project deployed semantic software — which basically understands the meaning of words — to analyze and interpret the opinions of citizen comments posted on the city’s Web site. The tool helps public administrators identify any particular hot button concerns in full public view, he said.

Semantic technology would be particularly useful in supporting the administration’s pledge to publish all nonemergency legislation, he said.

“Web 3.0 can replace, or at least supplement, public opinion polls with speed and inclusiveness not seen before,” Aker said. “Likewise, propositions of policies and programs can be tested, and opinions collected and understood, before their implementation. In this sense, the White House can rely on the wisdom of the crowd rather than solely on the best and the brightest staffers it employs.”