Google has restyled its YouTube page to make it easier for viewers to keep up with channel subscriptions. The redesign builds on last year’s introduction of a Guide on the home page. Google is now displaying the YouTube Guide across all devices.

The changes underscore the benefits of subscribing to the various channels. After viewers sign up, the Guide lets them know when there are new videos waiting, suggests other content they might enjoy, and points out videos friends are sharing.

The layout is simpler and more streamlined. The video appears at the top of the page, and the subscribe button, social actions and video information are directly underneath the player. Playlists appear to the right of the video. 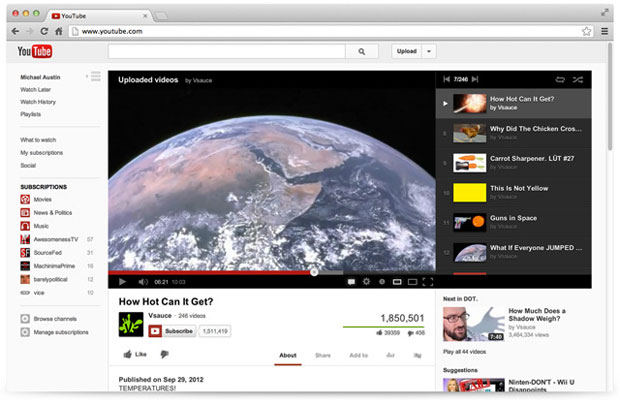 The changes are designed to encourage consumers to treat YouTube as a de facto television experience, complete with the ability to channel surf. All of the tweaks serve to make the site stickier.

Viewers were already channel surfing, mainly via the related videos bar at the right of the YouTube frame, he told TechNewsWorld.”One video leads to another, and before you know it you’ve been YouTubing for hours.”

Funny or Die has pioneered this approach by stringing its videos one after the other, asking viewers to vote “Funny” or “Die,” Plugh pointed out. “These sites have the advantage of constantly evolving content, offering participants the possibility of new experiences on a minute-to-minute basis. “

The challenge is to tailor the experience to keep the individual viewer’s attention, Plugh continued. Otherwise, YouTube risks losing people in the same way that television has already.

The day when YouTube and its ilk start to shed viewers as TV has done is a long way off, though.

Indeed, it is television that stands to lose the most from this development — not, as some might assume, competing online services such as Hulu or Netflix.

It’s probably too much of a stretch to say that YouTube and online content are replacing television at this point, but YouTube is certainly a competing force, Plugh said.

“The fragmentation of audiences has made things very difficult for traditional media outlets to hold the attention of their audience base,” he observed. “YouTube is one of the chief competitors for eyeballs in a world of plentiful choices.”

However, television is still a major medium that no advertiser or content provider can ignore.

Nor should they assume that the two are interchangeable, said Ben Bogardus, assistant professor of journalism at Quinnipiac University.

“The new YouTube design may not be as effective as Google hopes,” he told TechNewsWorld. People see videos on the Internet and TV shows as two different media, which they are.”

Instead of trying to copy television and encourage channel surfing, he said, YouTube would be better to go its own route and concentrate on what makes it unique.

“YouTube didn’t become the success it did by copying another media,” Bogardus said. “It created something new and different that no one had seen before. Copying an existing service seems like a step back innovation-wise, rather than a step forward.

“In order for this to work, YouTube must convince content providers to constantly update the site with new and compelling videos — and at the same time, also convince viewers to check it frequently to see that content,” he pointed out. “This can’t be something either side does for a few days and then slacks off. It must become an engrained habit — which I believe is a tall order for YouTube to achieve.”