For more than a decade, polymer memory devices (PMDs) have lingered in the queue of novel organic candidates for “next-generation” computer data-storage-and-retrieval chip technology.

The time for PMDs might finally be at hand … even if the first application is the humble radio-frequency identification (RFID) tags used in retail store product tracking and toll-road electronic collection systems.

As silicon technologies plunge ever deeper into nano-scale dimensions, pushing microchip densities to the level of the atom, business is looking for inexpensive alternatives to ever-more complex and costly silicon-based memory systems — the collection of microchips that determines the size and number of programs that a computer can run simultaneously, as well as the amount of data that can be instantly processed.

It’s a business worth getting into (though carefully). Revenue generated from PC DRAM chips climbed to US$31.9 billion in 2010 from $22.7 billion in 2009, according to El Segundo, Calif.-based ISuppli.

And programmable flash memory, currently being used extensively in portable devices such as cellphones, media players, digital cameras, tablets, netbooks and e-book readers, is one of the most profitable categories in the semiconductor industry. The flash memory market, which consists of two architectures — NOR and NAND — exceeded $26 billion in 2010 and will reach $51.2 billion by 2015, according to market researcher Databeans.

But DRAM is volatile and difficult to integrate, while flash offers relatively slow write speeds and less than optimum numbers of write/erase cycles. Thus, the search goes on for new and improved alternatives.

Organic electronic PMDs are being considered as potential substitutes for conventional semiconductor memories due to their simple device structures, ease of fabrication, compatibility with flexible substrates and comparative low cost.

Deposited on top of flexible plastic materials, plastic circuitry could, for instance, be built into flexible displays and packed into smaller spaces inside cellphones, MP3 players, plastic RFID tags and even credit cards.

“These devices can be made lightweight, tough, inexpensive and user-friendly because of the unique properties of polymers,” Debbie Hauser, a plastics industry consultant and principal of California-based Best Impressions, told TechNewsWorld.

PMDs can go from the simple to the complex. A PMD can consist solely of a polymer layer sandwiched between electrodes, or it can utilize more complex multi-layer stackable architectures.

Polymer memory stores information in a manner entirely different from that of silicon devices. Rather than encoding zeros and ones as the amount of charge stored in a cell, polymer chips store data based on the polymer’s electrical resistance. A polymer’s molecular structure can be altered by applying an electric field, causing changes in the material’s conductivity at any given spot. This can then be read as either a one or a zero in binary arithmetic. The implication is that, besides being cheap to produce, plastic memory can store data even when power to a device is turned off. 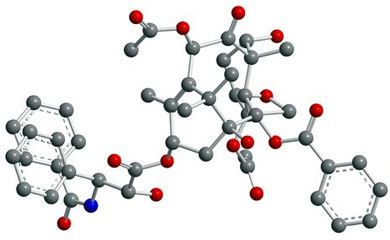 Stick model of a polymer molecule

“Polymers can be made with negative and positive species along the polymer chain,” explained Jeffrey T. Gotro, president of InnoCentrix, a California-based consulting firm serving the polymer industry.

These dipoles (opposite charges separated by a distance) can change their orientation in response to an applied electric field, according to Gotro. Alignment of these dipoles can cause changes in electrical resistance. The aligned and relaxed states can form the ones and zeros in a memory device.

“Polymers are easy to apply, can be stacked, and have the potential to be very cost-effective in enabling next-generation memory devices,” Gotro told TechNewsWorld.

Thanks for the Memories

For a while now, some major established corporate players and a few relative newcomers — most notably Thin Film Electronics ASA (“Thinfilm”) — have been having a go at the industrial implementation of PMDs.

The year 2002 was a busy one for inaugural PMD development:

In 2005, Philips Research, along with researchers at the University of Groningen in the Netherlands, emerged as a research leader for its contributions to the development of an inexpensive polymer memory chip. Working together, they were the first group in the world to demonstrate a non-volatile plastic memory technology that meets the performance needed in commercial plastic electronics applications like low-cost RFID tags.

But it’s Thinfilm, which has 15 years of experience in the field of non-volatile memories using functional polymers, that seems to be everywhere, working with just about everyone else in the polymer memory field.

Thinfilm’s memory devices are made on long reels of plastic using roll-to-roll printing, the same basic process used to produce newspapers. They sandwich a layer of electrically sensitive polymer between top and bottom layers of wire-like electrodes that are perpendicular to one another. Where the electrodes cross, it creates a charge-storage capacitor. When a small voltage is applied to the capacitor, the orientation of the polymer in the capacitor changes, creating ones and zeros.

Researchers at Xerox’s Palo Alto Research Center (PARC) have been developing a suite of materials for making printed electronics, including sensors and transistors. PARC works with Thinfilm to make higher-capacity printed memory devices that incorporate the research center’s printed transistors.

Another Thinfilm collaborator is Germany’s PolyIC, an electronic chip-printing company that prints RFID tags in a high-volume, low-cost, production method to cut costs for both raw materials and processing.

These flexible, thin RFID tags consist of roll-to-roll printed transponder chips based on the polymer semiconductor polythiophene and printed on flexible polyester film. During the process, the chips are mounted on a low-cost antenna and have a maximum read range of about three feet (one meter).

The range of polymer materials used in printed electronics includes:

Printed RFID offers the highest market potential because of its compatibility with a new kind of network that will allow “smart objects” — sensor-enabled physical items like cars in a city, home appliances, products in a factory, etc. — to “talk” to one another, the same way humans communicate over the Internet, according to Wolfgang Clemens, PolyIC’s head of applications.

“Here one needs to take into account that printed electronics also enables the integration of different devices with ‘smart objects,’ displays and sensors, which will allow additional business beyond standard RFID applications,” Clemens told TechNewsWorld.

The fundamental concept of storing programs in computer memory alongside the data they operate on is the crux of von Neumann stored-program architecture. Digital memory has accompanied every advancement in information processing technology.

Now, H.M. Colquhoun, a professor of materials chemistry at the University of Reading in the UK, is touting the potential of copolymers to store and process digital information at the level of single molecules.

Copolymers are made when two different types of molecules are joined in the same polymer chain. Any polymer molecule containing two chemically distinct monomers is the logical equivalent of a string of binary numbers, on which all current technological information processing is based.

Colquhoun bases his “synthetic molecular-scale information processing technique” on the use of polyimide (PI), a polymer of imide monomers derived from ammonia. The semiconductor industry uses polyimide as a high-temperature adhesive, a mechanical stress buffer, a photoresist, and as an insulating and passivation layer in the manufacture of micro-electro-mechanical-systems (MEMS) chips.

The concept on which Colquhoun’s proposal is based involves a “molecular tweezer,” a molecule-sized grasping tool some one-billionth of a meter long, which is able to probe the monomer sequences in co-polyimides.

After information is “written” to the polyimide chain, the tweezer’s two arms “feel” all the different sequences available on the chain, but bind strongly only at the sequence where the chain-structure and tweezer-structure are most closely complementary. The tweezer molecule should, in principle, be able “read” the sequence-changes produced by the “writing” process.

“The long-term potential of such a system is reflected in the fact that the binary information-bearing capacity of only one gram of a typical two-monomer copolymer is some one hundred billion gigabytes,” stated the good professor in a 2004 paper titled “Recognition of polyimide sequence information by a molecular tweezer.”

Deoxyribonucleic acid (DNA), which contains the genetic instructions used in the development and functioning of all known living organisms (except RNA viruses), is nature’s ultimate “bio-polymer.”

Since the main role of DNA polymer molecules is the long-term storage of information, scientists are looking to model DNA’s double-helix structure for its unsurpassed molecular recognition specificity and the information storage capabilities of genes. These DNA segments provide the coded instructions for synthesis of RNA, which, when translated into protein, leads to the expression of hereditary character in living creatures.

The supremely elegant DNA double helix is formed by double-stranded molecules running in opposite, anti-parallel directions. The sequence of four bases along the backbone encodes information, which is read as the genetic code copies stretches of DNA into the related nucleic acid RNA (a process called “transcription”).

Polymer scientists think the DNA molecule can eventually serve as a template pattern for the synthesis of organic (carbon-based) polymers to be used in computer memory (as well as other applications like data storage, light-emitting diodes and the arranging of electronic components).

In a study of “DNA-templated access to fully synthetic polymers,” Hassan Bazzi of Texas A&M University at Qatar describes a new method for creating an entirely novel class of “DNA-mimetic” polymers that mimic DNA’s 3-D double-helix structure to improve upon the flat, two-dimensional structure of silicon atoms crystallized in a diamond lattice.

These technologies are, of course, years away from practical application. But their poly-potential promises to make today’s standard memory technology horse-and-buggy forgettable.