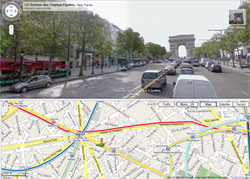 Google has pushed an update to its Maps application adding traffic data on surface streets.

The data will be drawn from GPS-enabled cellphones that are actively running the mobile version of Google’s map app, the company said in a blog posting Tuesday.

Although all users of Google’s mobile maps service appear to have access to the traffic data, only users with GPS-equipped phones with Google Maps installed can contribute speed information. The iPhone’s built-in map application does not support the crowdsourcing feature, according to Google.

The company had previously restricted traffic data to interstate routes, and at least some of that data was provided by traffic services, according to media reports.

It’s unclear if Google was using crowdsourcing to help generate its interstate reports, if it is still using those services and, if so, if reports from traffic services play into the descriptions of side-street traffic.

Google’s media relations office did not respond to a request for comment on the new service by this article’s deadline.

No News Is Good News?

The updated service works by sending Google anonymous information collected by a user’s cellphone GPS chip on how fast the car it’s in is moving.

Google’s service will likely run into the same sort of problem other traffic services get into when they try to predict speeds away from the mad crush of traffic, on quiet secondary and side streets where few drivers are likely to be motoring with their cellphones flipped open to Google maps, said Chris Hazelton, research director for mobile and wireless at the 451 Group.

“That’s when you get into samples of one or two people,” Hazelton told TechNewsWorld. “How do they know if I’m parking or sitting in traffic?”

Google seems to be satisfied with how well the service is likely to work despite the potential of a small number of users, noted Carl Howe, an analyst with the Yankee Group.

“The question is how many will actually have connected cellphones with GPS applications on them running all the time,” Howe told TechNewsWorld. “Google asserts, though, that there are enough that they’re getting good data.”

The number of cellphones equipped with GPS is large, but it’s not clear exactly how many of those phones allow applications to access data from their chips. Regardless, GPS in cellphones is in big demand among consumers and will become increasingly prevalent in the coming years, said Allen Nogee, a principal at In-Stat.

More Than a Convenience

Crowdsourcing is not entirely new in traffic circles. Some private and governmental traffic services already use data sent out by cellphones as they hand off from tower to tower to calculate speeds on nearby roads.

The service could do more than help drivers get to their destinations faster, said Google Maps Product Manager Dave Barth in a company blog posting. It could, in fact, help the environment and assist governments in making transportation planning decisions.

Google says it is mindful of privacy concerns associated with the service, and it has taken steps to make sure that only anonymous data is collected and trip information is discarded.

The company allows users to opt out of the service.