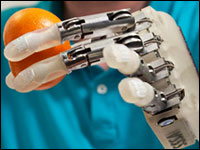 An amputee was able to feel sensations in a prosthetic hand temporarily wired to nerves in his upper arm.

Silvestro Micera, Ph.D., led a team of researchers at the Ecole Polytechnique Federale de Lausanne in Switerland and Scuola Superiore Sant’Anna in Italy in testing the bionic hand prototype last year. Dennis Aabo Sorensen, a Danish man who lost his hand in an accident nine years ago, participated in the experiment. The study is published in the Feb. 5 edition of Science Translational Medicine.

Early last year, a team of surgeons and neurologists implanted electrodes into the nerves of Sorensen’s arm. The sensors worked by measuring the tension in the artificial tendons in the fingers of his prosthetic hand. That information was then transformed into an electrical signal that the nerves could understand.

In tests, Sorensen was able to differentiate between the shape and consistency of six different objects, including plastic glasses and a baseball.

Researchers are now working on developing the technology beyond the prototype stage.

“These results open up very promising clinical possibilities for amputees,” said Micera. “In a few years from now, this technology could become clinically available.”

The work being done on developing sensation is crucial for creating better prosthetics, said Gerald Loeb, professor of biomedical engineering and director of the Medical Device Development Facility at the University of Southern California.

Using a conventional prosthetic is comparable to having a functioning limb that’s numb from the cold, he suggested. The hand and fingers might physically be there, but a person who can’t register sensations feels paralyzed.

“It is the next critical step in improving the function of prosthetic hands to be able to add that tactile sensation,” Loeb told TechNewsWorld. “It’s a huge advance in prosthetics to be paying attention to this now.”

There are several obstacles that must be overcome before the touch-sensitive bionic hand can become a reality in the prosthetics world, said Jason Ritt, assistant professor in the department of biomedical engineering at Boston University. For one, the devices must be durable.

“A device might work great at first — maybe a few months or even a couple of years — but is the surgery and cost worth it if it stops working or needs to be removed after that?” he asked. “For the real application, it is not enough to show improved sensation, it is also important to demonstrate sustained, robust operation.”

“The biggest challenge to ensure optimal, long-lasting performance was to properly connect the nerve trunk with the electrodes and to keep them from slipping around the insertion point,” said Paolo Maria Rossini, director of the Institute of Neurology at Policlinico Gemelli. “In the near future, we hope to achieve nerve-electrode connections that will remain fully functional for years.”

In addition to developing a stable nerve interface that can survive in the body for at least five to 10 years, the researchers will need to obtain necessary approvals for human implantation and conduct clinical trials before the technology can become generally available.

They are off to a good start, said Richard Weir, research associate professor of bioengineering at the University of Colorado Denver.

“I think this is a very exciting first step in demonstrating the validity of how sensory information can be integrated into an artificial hand,” Weir told TechNewsWorld.

“This is a powerful proof-of-concept demonstration,” he added. “Now the work needs to be done to translate this work from the lab to the field of prosthetics so users can benefit from it.”