Biologists are using a novel blend of technology and data sharing to track endangered wildlife, according to a report published this week in PeerJ.

The report details the results of about five years of experiments with ways to track the vocal activity of birds, frogs, insects and mammals across Puerto Rico and Costa Rica, led by Mitchell Aide and Carlos Corrada-Bravo, researchers at the University of Puerto Rico. 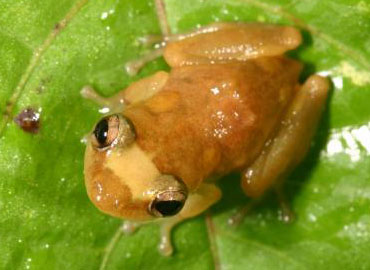 This is an image of the Eleutherodactylus juanariveroi frog, which was used by the study to investigate species variability over time. This species showed a significant decline in calling activity over four years, but in the fifth year the calling rate recovered to the original level.(Credit: CoquiPR.com)

The team set up an automated remote biodiversity monitoring network designed to address one of the biggest challenges of working in environmental conservation: the lack of human power to track, record and analyze the constant activity of thousands of species in any given habitat.

The use of satellite imaging and other automated technology has made it easier in recent years for researchers to track the effects of deforestation, said Aide, but it is still difficult for humans to monitor the thousands of plant and animal species that live in endangered habitats.

To change that, the researchers set solar-powered iPods to make audio recordings of 1-minute duration every 10 minutes and then scattered them throughout wetlands in Puerto Rico and Costa Rica.

Listen to the audio: Sound of the Eleutherodactylus juanariveroi frog

That accumulated data was uploaded to the team’s ARBIMON platform, making it easy for the researchers to listen in on the sounds of the Central American wetlands, even if they happened to be hundreds of miles away. They listened for the sounds of particular animals to learn about their presence and activity in that area — or to monitor the absence of specific calls.

Since the report was published, Aide has received calls and emails from average citizens in Puerto Rico and Costa Rica who had been making their own recordings without knowledge of the ARBIMON project. Some asked if they could help by uploading their own data to the system.

The newfound ability to use accessible technology like an iPod to collect data and then share it across a public platform could help improve conservation efforts, said Matthew Potts, a professor specializing in forest ecosystem management at the University of California Berkeley.

“Technology has real potential to improve sampling, monitoring and conserving wildlife,” he told TechNewsWorld. “Acoustic and remote-sensing technologies will make it easier to identify and track wildlife. The era of cheap Big Data is just beginning to touch the conservation community.”

ARBIMON could help spark other initiatives to further conservation efforts, said Aide. The team is working on future applications that could put more power in the hands of citizens interested in protecting biodiversity, especially in areas where damage to the environment is already evident.

“We’re hoping this paper … will help stimulate more interest in this and put more stations across the world,” he told TechNewsWorld.

“We’re also working on our Web-based application for remote sensing, and also developing a Web application that takes the hard part out of creating maps,” he said. “That way, people can track the changes to their land after effects like deforestation, urban sprawl or climate change.”

However, that information is helpful only if researchers are getting funding and working on ways to move beyond the wealth of data and determine how it can be used to come up with solutions that will help promote conservation.

“Knowing location and abundance of species is critical to understanding population and individual status, and if protection measures are successful,” Benson told TechNewsWorld.

“Unfortunately, though, a lot of money is spent on making problems known — such as endangered species — with little done to solve the problems,” he noted. “This project too merely identifies the extent of problems with new species; then new initiatives need implementing that will reverse negative trends.”