NASA has confirmed that after 36 years of journeying, Voyager 1 has reached interstellar space.

Voyager 1 has been traveling for about a year through a transitional plasma region in the space between the influence of Earth’s sun and other stars. 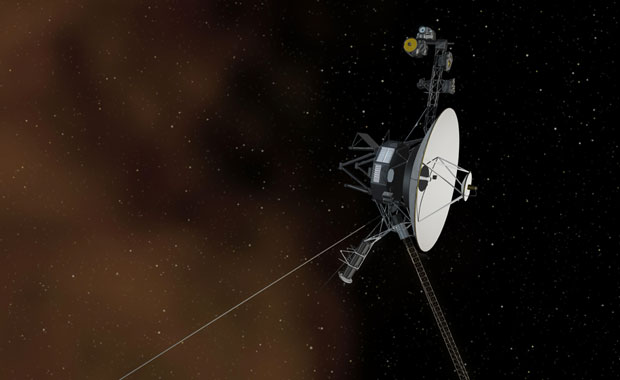 The Space Between: This artist’s concept shows the Voyager 1 spacecraft entering the space between stars. Interstellar space is dominated by plasma — ionized gas, illustrated here as brownish haze — that was thrown off by giant stars millions of years ago. (Credit: NASA/JPL-Caltech)

A team of scientists led by University of Iowa space physicist Don Gurnett has been tracking the Voyager 1’s journey.

Earlier this year, the researchers realized that the craft’s plasma wave instrument was picking up on electron plasma oscillations about 40 times greater than those inside the heliosphere. Those oscillations had been sparked by a burst of solar wind and magnetic fields that had erupted from the sun in March of 2012. They made their way to the Voyager 1 on April 9, causing the plasma around the spacecraft to vibrate like a violin string, according to NASA.

The pitch of those waves corresponded to an electron density that is to be expected in interstellar space, prompting NASA to confirm the Voyager 1’s arrival there.

“Voyager 1 is the first true stellar explorer from Earth,” James R. Webb, Ph.D., professor of physics and director of the SARA Observatory at Florida International University, told TechNewsWorld. “Nothing else we are in contact with has ever gone that far. … So it is a significant step in what Carl Sagan called ‘a cosmic civilization.'”

Voyager 1 launched in 1977, about two weeks after its twin, Voyager 2, took off. The crafts were designed to gather information about the outer solar system.

On board Voyager 1 is a gold record of Earth sounds including the music of Mozart and greetings from humans, among them Carl Sagan’s then-young son.

Since its launch, Voyager 1 has traveled an estimated 12 billion miles away from the sun. Along the way, it has provided NASA scientists with valuable information, including the surprising discovery of volcanic activity on Jupiter’s moon.

It was Voyager that snapped the famous “Pale Blue Dot” image of Earth, turning around to take the shot before it left the Solar System.

Interstellar space likely will provide new and intriguing information about the Milky Way galaxy, said Jonathan Lunine, Ph.D., director of the Center for Radiophysics and Space Research at Cornell University.

Eventually, that opportunity will run out, as the Voyager 1 doesn’t have enough power to keep going forever, Lunine added.

“Its next steps are keep on keepin’ on — until its nuclear power source fades to the point where not even a single instrument can be operated, maybe a decade or more from now,” he noted. “Then it’s time for the big sleep in the cosmic void.”

Voyager 1’s accomplishment is a reminder that some of today’s most valuable space information is coming from initiatives that began decades ago.

“We are overjoyed at the same successes our fathers achieved in 1960,” Lunine pointed out. “We are content to celebrate the successes of a spaceship launched in 1977. It is up to the next generation to take us back, to build more voyagers and send people to the Moon and Mars. The success is bittersweet, a sign of what we could do and become — yet we are choosing not to.”